In breast cancer, aggressiveness correlates to fibrotic stiffening of the tumour tissue. Fibrosis progressively prevents drugs from reaching the tumour cells, due to the formation of a stiff matrix that stabilises the tumour’s vascular network. However, the hierarchy and stability of the tumour vascular network are not reproducible in vitro.

To advance the field, we will model microtumours at various levels of fibrosis. We willl use human breast cancer cells adhered to 3D polymeric microscaffolds to model microtumours. The microtumours will be implanted in vivo in the respiratory membrane of embryonated avian eggs, in order to elicit a fibrotic foreign body reaction in the microtumours. The geometry of the 3D microscaffolds will be varied to condition the infiltration of the microtumours by the vessels and cells of the embryo, recreating an array of tumour microenvironments at various stages of fibrotic progression. We will predict mass transport of anticancer drugs by multiphysics modelling.

This study model will be validated with approved and investigational anticancer drugs whose clinical outcome is known to depend on the level of tumour fibrosis. This project will also provide a standardised and ethical platform to promote the clinical translation of new therapeutic products in oncology. 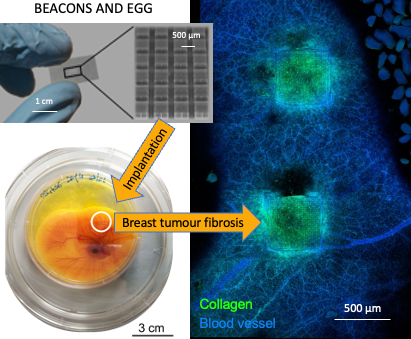